A few months ago, I posted a little compilation of the songs that The Fall had plundered (to varying degrees) between 1984 and 1988. Having just finished writing the Levitate post, it would seem an opportune moment to revisit the ‘borrows’, as by 1997 the group have racked up another album’s worth. 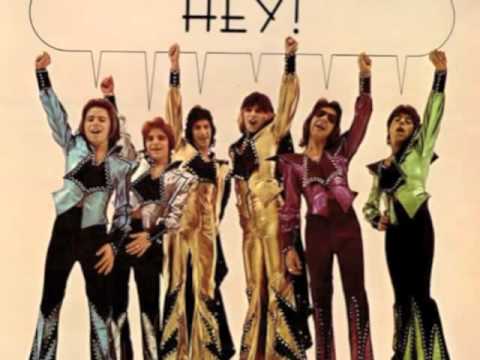 The Glitter Band were originally Gary Glitter’s backing band, but released material in their own right from 1973 onward. I’m never sure if Rock And Roll Part 2 was a Gary Glitter or Glitter Band song (please feel free to enlighten me) – this YouTube video credits it to The Glitter Band, using the cover of the album Hey! as its image; but discogs shows that this song wasn’t even on Hey!

Whatever: it’s not a very direct ‘borrow’, but you can certainly hear clear traces of the stomping drum pattern in both New Big Prinz and Glam Racket.

Smith claimed to have written all of Wrong Place, Right Time himself, but John Fogarty -who composed Gloomy from Creedence Clearwater Revival’s 1968 eponymous debut album – might argue that he provided some inspiration.

Little Doll is one of the best tracks from The Stooges’ patchy but frequently glorious 1969 debut. The song’s only flaw is the criminal way Ron Asheton’s imperious guitar solo is cut short just as it’s getting going. Smith and Bramah seem to have had at least half an ear on this track when they concocted Sing! Harpy.

Black Monk Theme Part 1 is a much more straightforward ‘borrow’ that I covered on the Extricate post:

Shift-Work and Code: Selfish were generally ‘borrow’-free; The Infotainment Scan (if you include bonus tracks) however, contained three (not including Glam Racket‘s debt to the Glitter Band). Why Are People Grudgeful? was an amalgam of two songs – People Grudgeful by Joe Gibbs and People Funny Boy by Lee Perry. The League Of Bald-Headed Men (although MES denied ever having heard any of their music) owes a clear debt to Led Zeppelin’s Misty Mountain Hop:

And – slightly tenuously – the line (at 1:36) ‘trying to get over’ in It’s A Curse is lifted from Curtis Mayfield’s Superfly.

Levitate also contains three obvious ‘borrows’. Ten Houses Of Eve is distinctly similar to the fuzzy, gnarly garage-rock of The Seeds’ Evil Hoodoo. Steve Hanley by his own admission was inspired by The Osmonds’ Crazy Horses when creating the bass riff for The Quartet of Doc Shanley.

Finally, the piano riff of Everybody But Myself is quite close to Derrick May’s house-trance Strings Of The Strings Of Life.